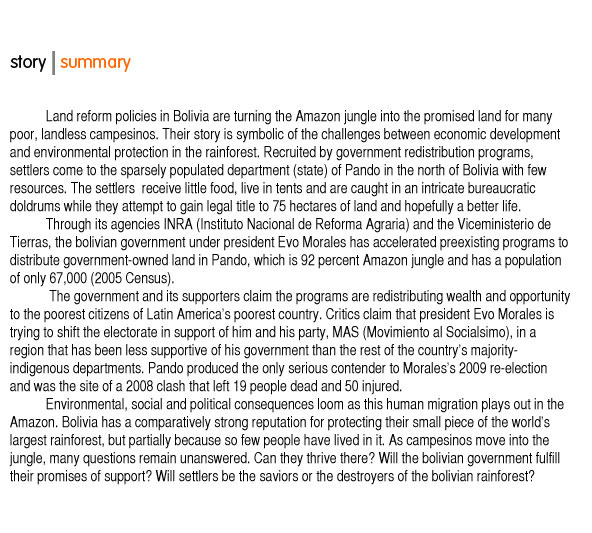 USE ARROW KEYS OR SCROLLING TO NAVIGATE 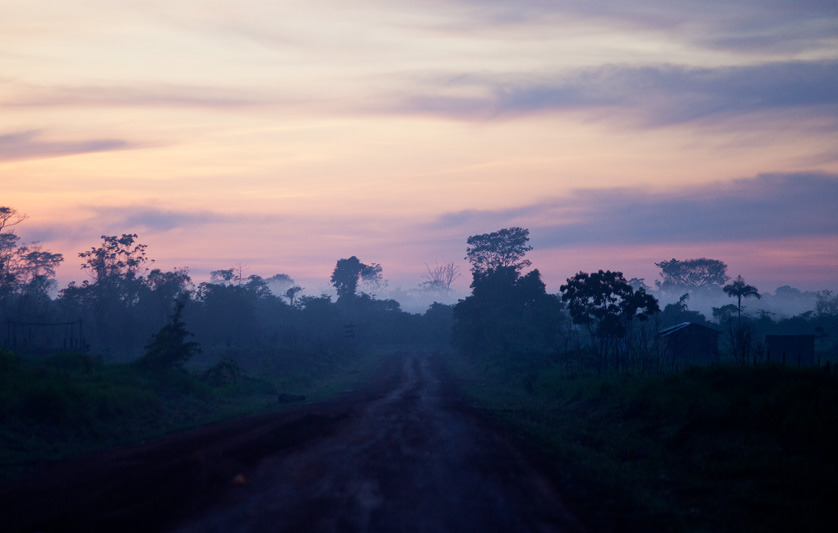 The road the leads to the settlers' camp outside Puerto Rico, Bolivia. 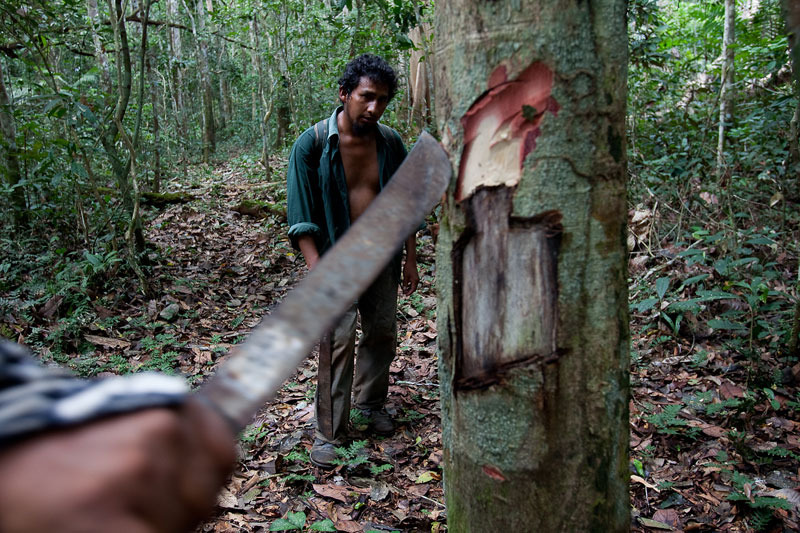 Tito Lequipe takes a break while on a scouting trip with a group of aspiring settlers in the bolivian Amazon. Lequipe and others came to the north as part of a government program to distribute land to poor bolivians. The settlers plan to grow products such as cacao, castaña (Brazil nuts) and other natural forest products so that their presence in the jungle can protect it from large-scale, agricultural development. However the future is uncertain since their success is largely determined by markets for these products and other factors out of the settlers control. 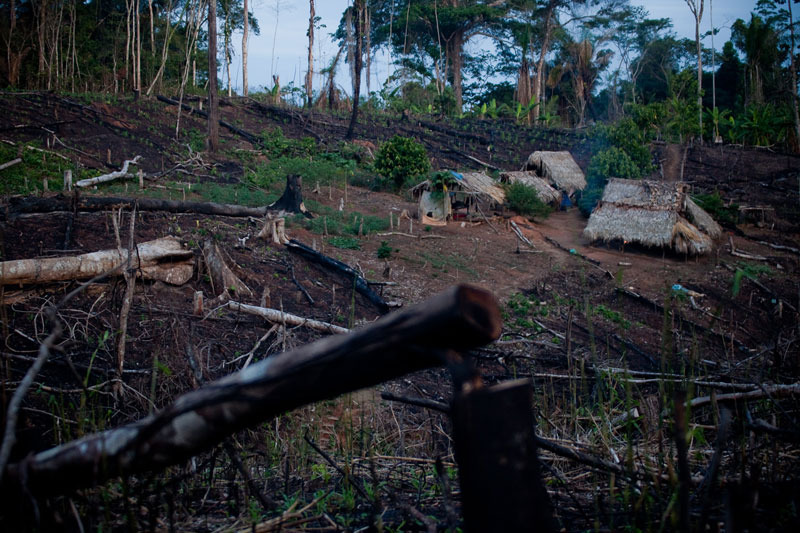 Charred, recently felled trees surround an impromptu settlement of approximately four to five hectares in the Amazon near Puerto Rico, Bolivia. The men who cleared this land are in the process of getting legal title to this land but have already begun planting plaintains, yucca, coca and other crops that they farm for food and to bring to market. 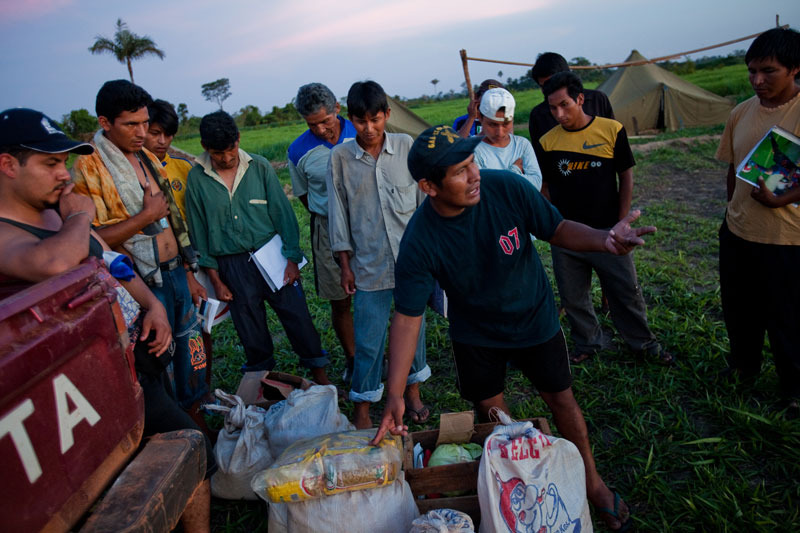 Cristobal Gabriel Zapana, center, argues with, Armando Miranda, an official from the Viceministerio de Tierras, about the quantity of food brought for him and other settlers during a food ration shipment. "Frankly, we feel abandoned," settler Nieves Apaza said to Miranda upon receiving inadequate food. The rations arrived a week late and the food pictured here is supposed to last 23 people for two weeks. Bolivian government agencies actively recruit settlers through television commercials to move to the northern jungle province of Pando and claim they will provide for them during the settlement process. 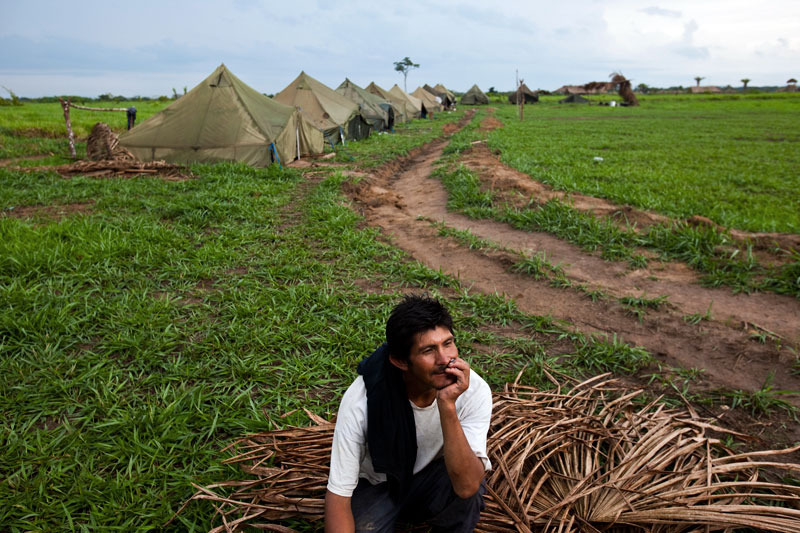 Polonio Gonzalez takes a moment to reflect while discussing his and his fellow settlers current predicament. Gonzalez and others are living in a camp set up for aspiring settlers who intend to move in to the in Amazon jungle near Puerto Rico, Bolivia. Gonzalez and his fellow settlers have been living in the camp for six weeks, have been shown one inadequate parcel of land and feel abandoned by the government who is slow to deliver food rations and keep the settlers informed about how to navigate the legal process of receiving title to their land. 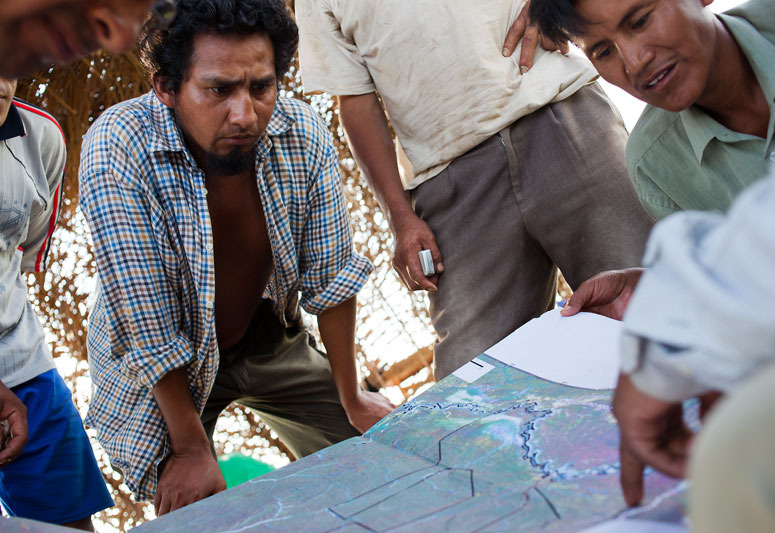 Tito Lequipe and other settlers talk with an official from the agrarian reform agency, INRA, discussing potential areas where the settlers could establish their new community. 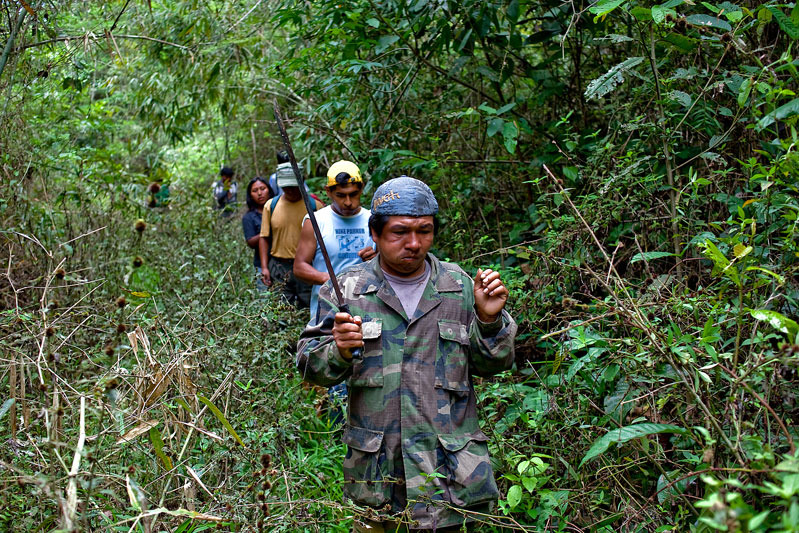 Settlers hack their way through part of the Amazon jungle near Puerto Rico, Bolivia while on a scouting trip inspecting potential land to settle. 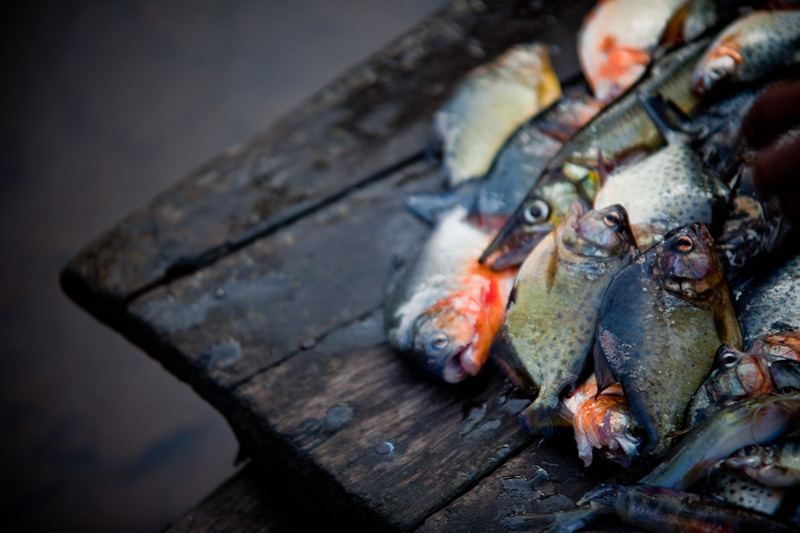 A small catch of Piranhas will become dinner while on a scouting trip to inspect potential land to settle in the Amazon jungle near Puerto Rico, Bolivia. Even though life in the jungle is difficult, the settlers long to leave the camp and live where they can provide for themselves. 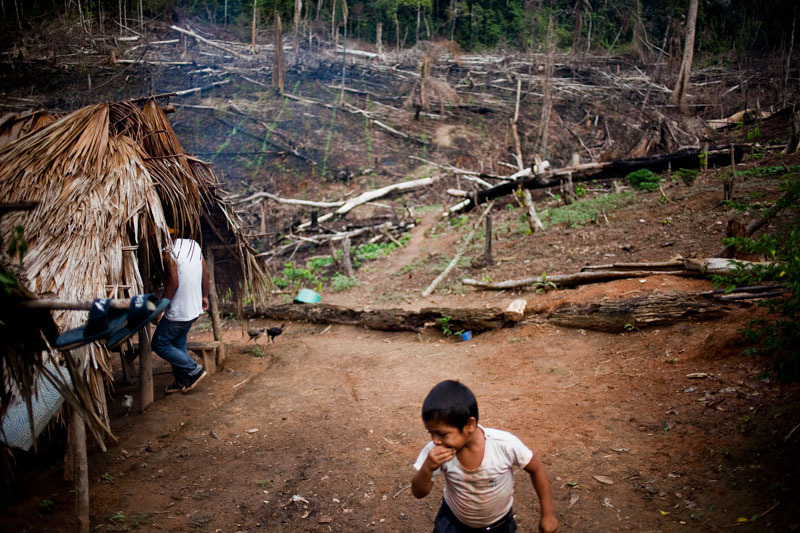 Settlers spend the morning at an impromptu camp in the Amazon jungle near Puerto Rico, Bolivia. Land owners can legally clear up to five hectares of land to grow crops for personal use. Settlers hope to harvest natural products such as Brazil nuts from the surrounding forests, thus making a living while leaving the forest intact. Bolivia accounts for half of the world's Brazil nut production. Even so, there is constant pressure to clear the forest for cattle grazing. 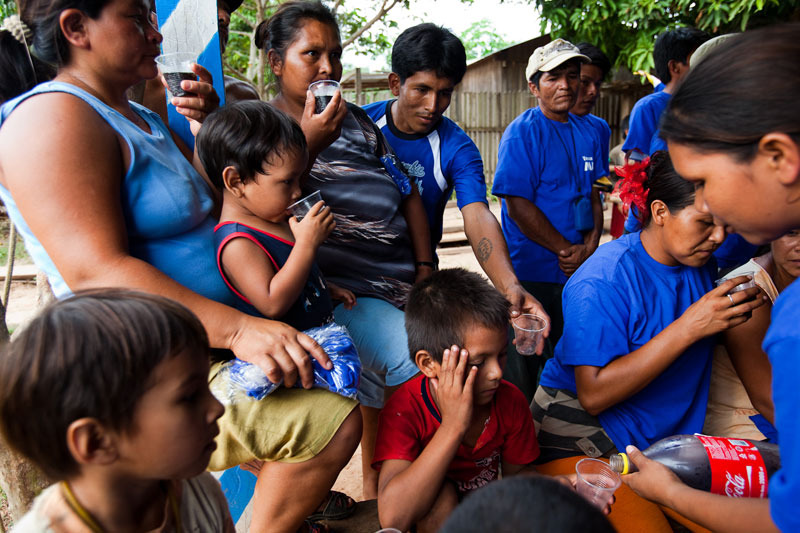 Settlers attend a small political rally in Puerto Rico, Bolivia where the president Evo Morales's Chief of Staff gave a speech to inspire citizens to get out the vote against the president's main opponent Manfred Reyes Villa. The land settlement program is controversial throughout Bolivia. The program has been criticized as a political maneuver by Evo Morales and his party, MAS (Movimeinto al Socialismo), to shift the electorate in their favor. Pando is sparsely populated (approximately 67,000 people in the 2005 census) and is one of the few areas of Bolivia that opposes the president. 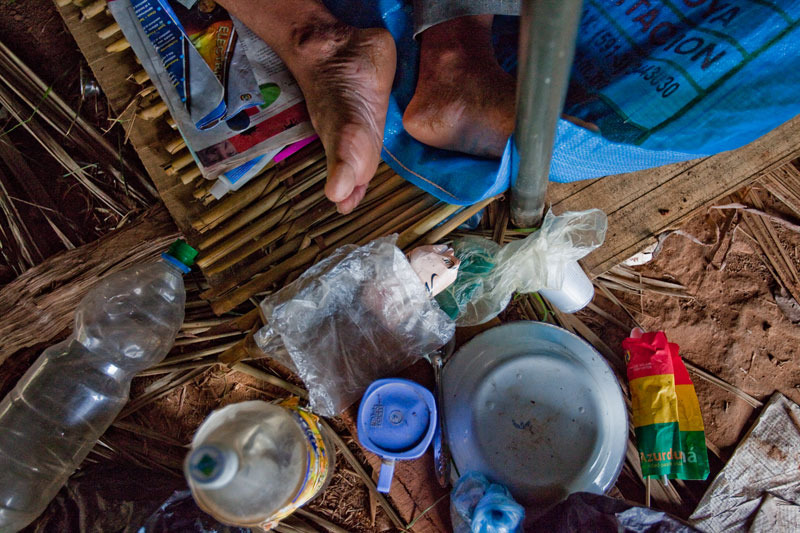 Marino Flores takes a rest on a his plastic and woven mat bed inside his tent home in a settlers camp in Puerto Rico, Bolivia. Marino Flores had a small coca farm in his native Yungas and came to Puerto Rico in the northern jungle area of Bolivia with 200 Bolivianos (approximately 30 USD) in his pocket. He has been trying to obtain legal title from the government to a parcel of land in the Amazon, which he would farm. However Flores has been in the camp for six weeks, his money has run out, he hasn't spoken to his family and he—as well as his fellow settlers in the camp—are dependent on food rations provided by the government. Rations often arrive late and with too little food while settlers wade through a complicated bureaucratic process to get land. Flores ended up having to leave the camp temporarily to work by selling a small crop of coca lent to him by a friend from his home town in Yungus. 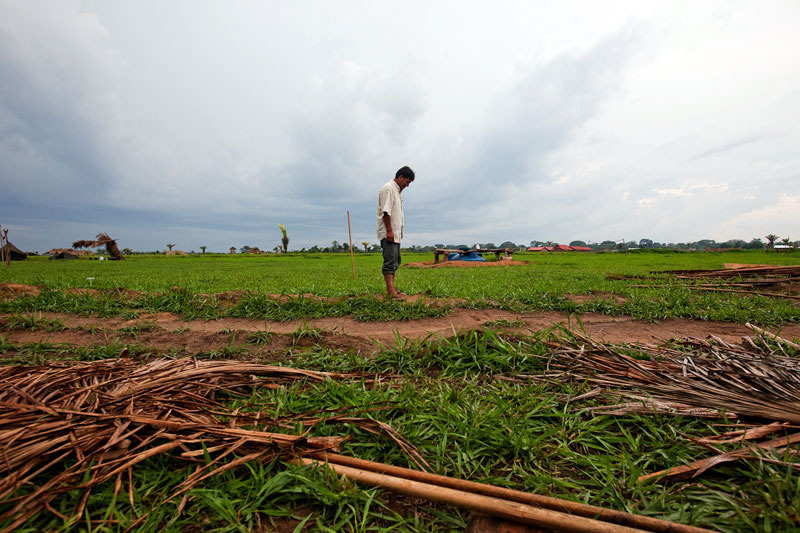 Aspiring settlers face daily conundrums while trying to get legal title to land in the jungle. For example: If they leave the camp to work, they cannot continue the process of obtaining a land title. But if settlers stay in the camp, they are dependent on the government. The settlers were shown a tract of land after arriving to the camp, but they rejected it claiming that 80 percent of the land was low and prone to flooding during the rainy season, when the rivers can rise over 30 feet. 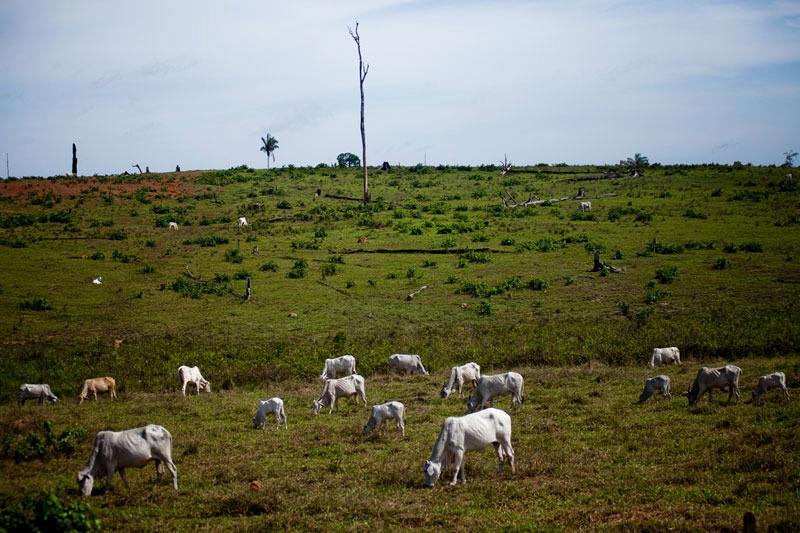 A lone, charred tree in the distance leaves a hint of the rainforest that was cleared as cows graze on a hacienda near the city of Cobija, Bolivia. The constant domestic and international market for beef means there is constant pressure to cut down the rainforest if it cannot provide a sustainable, profitable way for farmers to make a living by keeping it intact.